Ned Jarrett was born on October 12th of 1932 in Newton, North Carolina as one of 4 children. He is the father of NASCAR Winston (Sprint) Cup champion Dale Jarrett.

Jarrett was best known for his calm demeanor, and he became known as the "Gentleman Ned Jarrett". Yet he was the exact opposite when he got behind the wheel of a car. 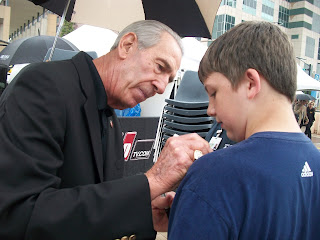 Jarrett was introduced to cars early in his as his father let him drive the family car to church on Sunday mornings when he was nine years old. Ned started working for his father in his sawmill by the time he was 17, but racing was what he really wanted to do with his life.

Ned drove in his first race in 1952 at the historic Hickory Motor Speedway; that was also HMS first race. He drove a Sportsman Ford that he co-owned with his brother-in-law, and finished tenth. This did not go over well with his father. His father told him he could work on cars but not drive them. Once, his brother-in-law was under the weather for a race and asked Ned to fill in for him. Ned used his brother-in-law's name and came in second in that race. That worked out so smoothly that Ned drove in a few more races under an assumed name, but was finally caught by his father after winning a race. His father told him if he was going to drive to at least use his own name.

Jarrett raced in his first NASCAR Grand National race at the 1953 Southern 500 at Darlington Speedway. He was out after 10 laps after the engine leaked oil.

In 1955 Ned won the track championship at the track his son would make his first start at; Hickory Motor Speedway.

Jarrett came in second in the Sportsman (Nationwide) series points in 1956, and in 1957 and 1958 he won the championship.

In 1959, he was hoping to move up to the Grand National (Sprint Cup) series. He purchased a Junior Johnson Ford for $2,000. He didn't have enough money to buy the car so he waited for the banks to close on Friday and wrote the check. He entered two races that weekend, one at Rambi Speedway at Myrtle Beach and one at Charlotte NC. The one at Myrtle Beach he won and went to Charlotte the next day. The race at Charlotte Ned had to give up his car on the first caution due to his hands being cut up from the previous race, to Joe Weatherly. After Junior Johnson’s engine dropped he took over and won the race. The prize money still went to Ned but he paid Junior and had enough to cover his check on Monday.

In 1960, Jarrett won five races but lost the championship to Rex White. In the early ‘60’s Ned started broadcasting on a regular show on a Newton, NC station, WNNC; WNNC is also the same place Dr. Jerry Punch started his broadcasting career.

Ned beat Rex this year to win the Grand National (Sprint Cup) championship in 1961. He finished in the top five 22 times and finished in the top ten in 34 races; he won one race in his Bee Gee Holloway owned Chevrolet. That year he sold the first African-American NASCAR driver Wendell Scott his old 1961 Chevrolet Bel Air coupe which led Wendell to his first win.

In 1962 Ford introduced the new “Fastback” which Ned, to make the field for the Daytona 500, had to air-chisel the body of an old “fastback” dirt car with his crew chief. Next, they air-chiseled the new body from a '63 Fastback and fitted it onto the old body and chassis. This hybrid body went on to become the car Ned drove into the "Fastback Ford" sweep (top five positions) at Daytona that year. The Fastback bodies had arrived from Ford in wooden crates.

In 1964, Jarrett joined a team owned by Bondy Long and with the support of Ford; he won 15 times but lost the championship to 7-time champion Richard Petty. Jarrett picked up his first of only two superspeedway wins at Atlanta Motor Speedway.

In 1965, Jarrett became a super star when he won 13 races and another Grand National (Sprint Cup) championship. He placed among the top five in 42 of the 54 races that he ran.

In 1965 NASCAR saw there wildest race at the Southern 500 at Darlington Raceway. Rookie driver Buren Skeen died after two cars ran into the side of his car in the early laps. Sam McQuagg was leading the race; when Cale Yarborough tried to muscle past McQuagg for the lead Yarborough flew over the guardrail, rolled around six times, and ended up at the end of the parking lot by a light post. Yarborough waved to the crowd as he walked back to the pits. With 44 laps left, Fred Lorenzen and Darel Dieringer were fighting for the lead far ahead of Jarrett. Lorenzen's motor expired, and even before he could get into the pits Dieringer's motor started smoking too. Dieringer continued at a slower pace to finish third. The race was won by Ned Jarrett by 14 laps, which is the largest margin of victory according to miles in NASCAR history to date.

In 1966, Jarrett was in the run for another championship when Ford announced that they were withdrawing from NASCAR. Jarrett decided that it was time to retire at the young age of 34 since he was sponsor less while at the top of his game.

In 1978, Jarrett became a radio broadcaster on the Motor Racing Network (MRN) Radio.

One of Ned’s broadcasting career highlights was at the 1984 Daytona 500 which was Richard Petty’s 200th win; Ned interviewed the United States of America’s president Ronald Regan, live before the race.

Ned Jarrett was inducted into the International Motorsports Hall of Fame in 1991.

A famous moment in Ned’s television career was when he called his son Dale's victory at the 1993 Daytona 500, openly going against the networks rules of being biased, he tried to coach Dale to beat Dale Earnhardt in what is commonly known as “The Dale and Dale Show”. Embarrassed by his loss of objectivity, he tried to apologize to Earnhardt after the race, but Earnhardt merely smiled and said, "I'm a father, too." Jarrett also has been a television broadcaster on The Nashville Network, CBS, Fox Sports Network, and most recently ESPN.

In 1999 his son Dale won his first and only championship in the Winston (Sprint) Cup series making him and Ned the second ever father-son combo to win championships only to Lee and Richard Petty.

On May 26, 2007 Ned returned to the booth to call the CARQUEST Auto Parts 300 Busch (Nationwide) race alongside with the ESPN crew of Andy Petree, Jerry Punch, and his son, 1999 Cup Champ, Dale Jarrett.

Ned hosted a daily radio program about racing on MRN Radio called "Ned Jarrett's World of Racing" until May 15, 2009, when he announced he would retire from the program. Joe Gibbs became the show's new host the following Monday, May 18.

Ned's other son Glenn Jarrett, was a regular Busch (Nationwide) Series driver and had a few Winston (Sprint) Cup starts in the 1980s but now covers cable television as a race broadcaster. Ned also has a daughter Patti, who before becoming a mom, also worked in racing. Patti is married to Jimmy Makar, who worked with Dale Jarrett for three years at Joe Gibbs Racing, and won the 2000 championship crew chief with Bobby Labonte. Dale's son, Ned’s grandson, Jason Jarrett also had numerous Busch (Nationwide) and a few NEXTEL (Sprint) Cup starts, with several wins in the ARCA RE/MAX Series.

Total in Ned’s very short Grand National (Sprint Cup) career he won 50 races which is 8th on the all-time list, and 2 championships.

Which underdog team do you feel will have the most success over the next 10 years in NASCAR Sprint Cup Racing?